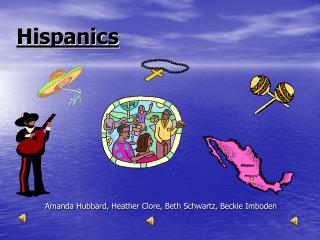 Hispanics Amanda Hubbard, Heather Clore, Beth Schwartz, Beckie Imboden. Interesting Facts. Hispanics have been around for a long time! In 1609, 11 years before the Pilgrims landed at Plymouth Rock, the Mestizo (Spanish and Indian ancestors) settled in what is now Santa Fe, New Mexico.

Impact of the Great Depression on American Society - . ib history of the americas. note-taking activity. use the chart

INEQUALITY - . how do you make sense of our differences?. how unequal are we?. median family income-2007. u.s. census.

Should patients tell researchers what to do? If so, How - . thinkwell – putting the public at the heart of research

Working with Students with Learning Disabilities - . learning disabilities: incidence. 5 – 20% of the general

Diversity &amp; Sensitivity - . prepared by michael cummings. each person is representative of a mixture of

World Affirming - . focus on self improvement. run as a business. employs techniques/tools/practical strategies. no need