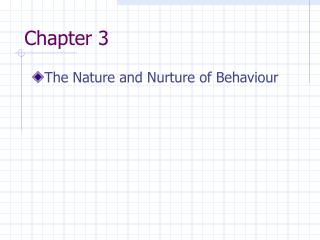 Chapter 3 The Nature and Nurture of Behaviour Genes: Our Biological Blueprint Chromosomes threadlike structures made of DNA that contain the genes DNA (deoxyribonucleic acid) complex molecule containing the genetic information that makes up the chromosomes