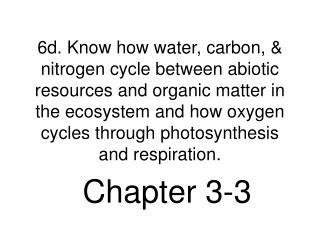 6d. Know how water, carbon, & nitrogen cycle between abiotic resources and organic matter in the ecosystem and how oxygen cycles through photosynthesis and respiration. Chapter 3-3. Key Terms.

The Nitrogen Cycle - . chapter 2.3. what accounts for the differences?. what is fertilizer?. one of the main ingredients

How do resources and abiotic factors affect the organisms in an ecosystem?

The Carbon, Oxygen &amp; Nitrogen Cycles - . take a deep breath. let it out. what did you breathe in? what did you

Methanol Droplet Extinction in Oxygen/Carbon-dioxide/Nitrogen - Mixtures in microgravity: results from the international

The Water Cycle and How Clouds Form - . 7 th grade science - weather. the water cycle. water is constantly cycled through

Carbon Dioxide- Oxygen Cycle - . ∞. plants and animals are linked for survival through the carbon dioxide-oxygen cycle.

The Nitrogen Cycle - . vinny hageman and kevin lombardo. found in animal waste and minerals present in all living