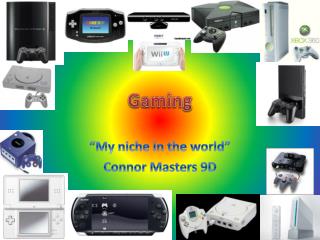 Gaming. “My niche in the world” Connor Masters 9D. What it is… . Gaming is the entertaining experience of playing characters in a virtual reality. Gaming - . by the ranter, thechrisd – thechrisd.com. what is gaming?. the art of playing video games on one of many

GAMING - . don’t play nooby games because people will think you’re a nerd then you have no friends. don’t play halo

Gaming Introduction - . gaming and tradies. gaming is the biggest contributor to revenue at tradies across both venue –