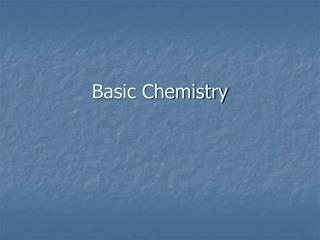 Basic Chemistry. Matter and Energy. Matter – anything that occupies space and has mass (weight) Energy – the ability to do work Chemical Electrical Mechanical Radiant. Composition of Matter. Elements Fundamental units of matter 96% of the body is made from four elements Carbon (C)

Intro to Biology and Basic Chemistry - . ch. 1. biology is woven into the fabric of society as never before knowledge of

Intro to BioChem: Basic Chemistry Concepts (Ch. 2) - . definitions. element -a substance that can’t be broken down into

Basic Chemistry Concepts - . structure and function of all living things are governed by the laws of chemistry

BASIC CHEMISTRY - . basic chemistry. atoms, elements, and compounds atom smallest unit of matter can not be broken down

Basic Chemistry - . general biology. matter – atoms and elements. living and nonliving things are all made up of matter

Chapter 2 Basic Chemistry - . introduction . our bodies are made of different chemicals. to understand the body, you need