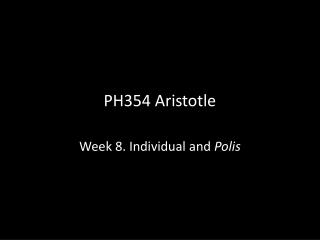 PH354 Aristotle. Week 8. Individual and Polis. Introduction. The Nicomachean Ethics centres on the life of the individual, and the way in which the individual is able to become happy through the development of intellectual and moral virtues. PH354 Aristotle - . change (1): change and the definition of change. introduction. change and commonsense metaphysics the

Aristotle - . 4 th century bc. aristotle &amp; socrates can you guess who is who and why?. aristotle. aristotle’s

Aristotle - Lecture 03. aristotle. born at stagira,a greek colonial town near aegean in 384 b.c. he was a

Aristotle - . tragedy and the tragic hero. aristotle’s life. student of the philosopher plato teacher to alexander the