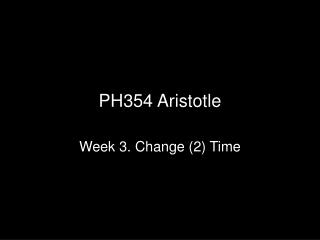 PH354 Aristotle. Week 3. Change (2) Time. Introduction. Aristotle offers an important treatment of time in the Physics. It is a subject of intense scholarly discussion.

THE HISTORY OF PSYCHOLOGY - . from aristotle to austria to america. perhaps the most fascinating and mysterious universe

CmpE 104: Lesson 9 - . the logic of compound statements. the first great treatises on logic were written by the greek

Aristotle’s Metaphysics - . a person has personlike qualities?. first philosophy. aristotle tells us that this branch