Is Greek Life right for me? - PowerPoint PPT Presentation 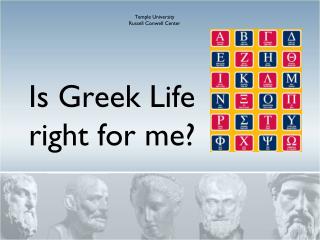 Is Greek Life right for me? Temple University Russell Conwell Center. Is Greek Life right for me?. What is Greek Life?. Joining a Fraternity/Sorority is much different that joining a normal Temple club or organization.

Is Greek Life right for me?

Minotaur, Labyrinth, Greek Tragedy and Greek Architecture - . an introduction of the classical period. outline of