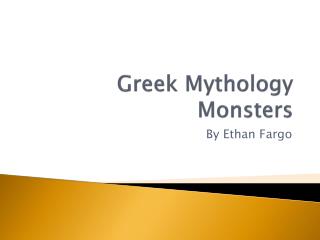 Greek Mythology: - . a crash course in the crazy lives of the kooky greek gods and other such things. in the

Greek Mythology - . and the modern world. mythology in business. hundreds of companies take their name, logo, or slogans

Greek Mythology and Gods &amp; Goddesses of The Odyssey - . what is mythology?. an organized collection of stories

Mythical Monsters and Greek Gods - . by sam olson. harpies. they are monsters with the face of a woman and a body of a

Ancient Greek Mythology - . origin. greek mythology is the body of myths and legends belonging to the ancient greeks

12 Mythical Monsters and the Greek Gods - . by justin mccully. medusa. medusa used to be a mortal woman. she was turned

Greek Monsters and Creatures - . mythology. myths: used to help explain what is not clearly understood; explain the

Greek Mythology - . the creatures. 1: minotaur. monster with the head of a bull and the body of a man. gorgons. monstrous

Monsters of Greek Mythology - . by preston petersen and tom kruckenberg.

Greek Monsters - . by thomas barricklow. medusa. medusa has a body of a girl and her hair is made of snakes. the legend

Greek Mythological Monsters - . by ben segal. gorgon. the gorgon is a vicious beast. with snakes for hair and immortality