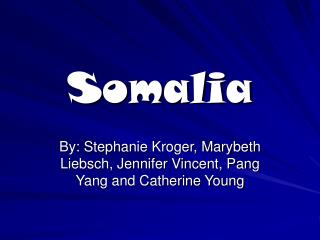 Drought Monitoring and Mitigation in the Horn of Africa Are we prepared? - . z. balint, chief technical advisor p.

Somalia Black Hawk Down - . battle of mogadishu. where?. somalia is in east africa mogadishu is the capital city. map.

List the 5 things / people in your life that have influenced who you are? - . do you think this list would change if you

KENYA - . by taylor lett. relative location of kenya to africa. kenya is in the south eastern part of africa. its capital

Best Management Practices to Deter Piracy in the Gulf of Aden and off the Coast of Somalia - . typical attack profiles

Kenya - . by benjamin and brittney. flag. geography, land, and climate. kenya bordered by ethiopia to the north, somalia

Visit Somalia - To have a great enjoyment with your friends or

WHERE IS SOMALIA NOW? - . somali reconciliation &amp; restoration council (srrc). a government comprised of the 5