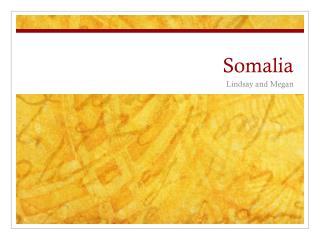 Somalia. Lindsay and Megan. Geography. Fact Sheet. Borders Ethiopia, Kenya and Djibouti with the Indian Ocean to the North and East Population: 9.6 million Relies on an agricultural economy, including bananas and livestock. Coastline provides an ample fishing industry as well.

Visit Somalia - To have a great enjoyment with your friends or

WHERE IS SOMALIA NOW? - . somali reconciliation &amp; restoration council (srrc). a government comprised of the 5