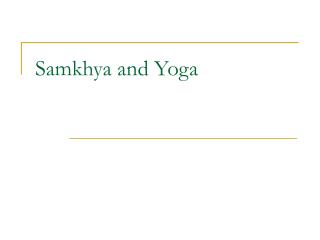 Samkhya and Yoga. Samkhya . The Samkhya system of Kapila was formulated in the 7 th century B.C. The system is most notable for its theory of evolution and for its reduction of the numerous categories of Nyaya and Vaisesika to two fundamental ones, namely, purusha and prakriti.

Yoga for Athletes - . ist day. the transformation of yoga. no longer seen as a strange eastern practice where you ties

Cherry Tree - . 3 e strategy. experience what you have benefited from…(sports/childhood/competition…) explore (in the

Yoga - Moral Principles - . namaskar. it means: i salute the divinity within you with all the good feelings of my mind

Introduction to Hinduism - . misperceptions. hinduism is an organized religion it is polytheistic all hindus are

YOGA - . introduction to yoga. the word yoga is derived from the sanskrit language which means to unite or harmonize. it

Osho Dhara (a lively stream of Osho) - . presents samadhi pragya. before we enter the subject of ‘samadhi pragya’ it

Yoga and Medicine - 3 questions what is yoga? what is the evidence that yoga has health benefits? how do i use and