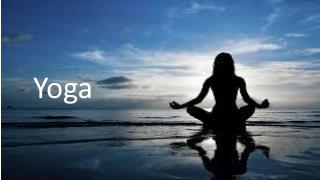 Yoga. “WHAT IS YOGA?”. Yoga is a word from the ancient Sanskrit langue that means Union, the attachment and merger of the individual human consciousness with the cosmic consciousness.

Everything You Need to Know About Prenatal Yoga - If you’re just getting ready to start an exercise regimen, yoga is

7 Various Yoga Poses for Back Pain - Are you suffering from back pain? start practice with this different yoga poses and

By, Dr. Shamanthakamani Narendran M.D.(Pead), Ph.D. (Yoga Science) - . for everyone in all the worlds. presents the

Meditation Ananda Marga Yoga - . 1- knowing the mind. the mind is the instrument to be utilized during the practice of

What is Dharma ? - Religion…and religions the dialectic progression of yoga the path of action (karma) the path of

YOGA - Name: rani khushalani title of the speech: history of the yoga and their benefits how yoga is art, science and

Raja (Royal) Yoga All classes 90 minutes, Open to all Instructor has nearly 40 years of experience in yoga - Ongoing,

The Perks of Joining Yoga Classes - If you want to enjoy the benefits of yoga, it is highly recommended that you join any