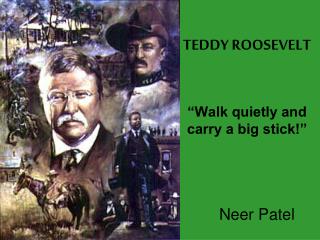 TEDDY ROOSEVELT. “Walk quietly and carry a big stick!”. Neer Patel. Bell Work. Who were the Progressives? Who was the 26 th President of the United States?. Teddy Roosevelt. born in New York when he was born, doctors said that he would probably never reach his teenage years (sickly) Teddy Roosevelt - . early life. born into a well-to-do family of dutch heritage in new york. was sickly as a youth, but

Teddy Roosevelt: - . america’s first “modern” president. students will be able to discuss some of teddy

The Progressive Presidents - Teddy Roosevelt - . opener. would you consider barack obama to be a progressive president?