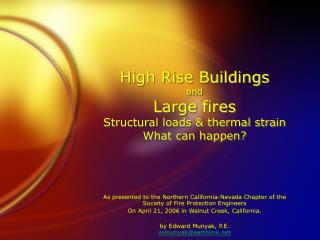 High Rise Buildings and Large fires Structural loads & thermal strain What can happen? As presented to the Northern California-Nevada Chapter of the Society of Fire Protection Engineers On April 21, 2006 in Walnut Creek, California. by Edward Munyak, P.E. esmunyak@earthlink.net

The Color Wheel - . history of color. colors are often symbolic. let’s talk about what role color has played in

Color - . color -. the visual response of the eye to reflected rays of light element of design 3 dimensions hue value

COLOR - . the painter’s element. spectrum. color is a property of white light. when light rays are bent by a prism or

I see a firefighter fighting fires - . i see a car mechanic changing tires. i see a pilot flying though the air. i see a