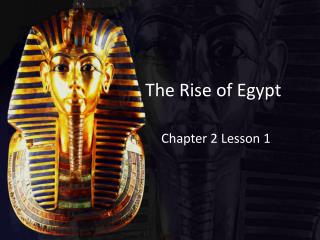 The Rise of Egypt. Chapter 2 Lesson 1. Summary. Along with the rise of civilization in Mesopotamia, Egypt emerged along the Nile River . Developing into a vast empire that had a stable monarchy, religion, languages, and trade networks in the Mediterranean Sea. Guiding Question.