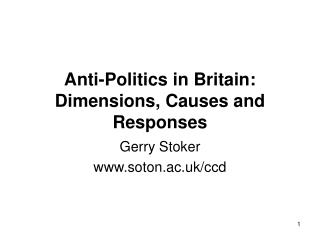 Anti-Politics in Britain: Dimensions, Causes and Responses Gerry Stoker www.soton.ac.uk/ccd Some findings about British politics 32% claim “to never follow” accounts of political and governmental affairs 2 in 10 can name no party leader or any government ministry