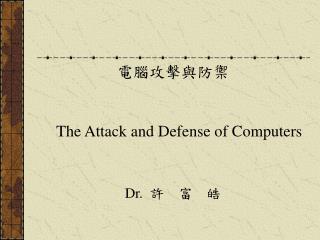 電腦攻擊與防禦 The Attack and Defense of Computers Dr. 許 富 皓. Virus [ Internet Security Professional Reference ]. Virus. A sequence of code that is inserted into other programs . A virus can create a copy of itself to inserted in one or more other programs. DIVE COMPUTERS 101 - . dive computers 101 is designed to provide divers with the theory, operation and benefits of

The Stall, Airfoil development, &amp;Wing Lift and Span Effects - . lecture 4 chapter 2. the stall. what happens when

Is It Time To Play Offense or Defense with Defense Stocks? American Association of Individual Investors (DC Chapter)

Is It Time To Play Offense or Defense with Defense Stocks? American Association of - Individual investors (dc chapter).