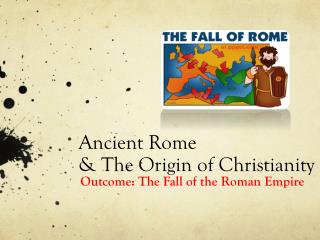 Ancient Rome & The Origin of Christianity

Ancient Rome & The Origin of Christianity

Ancient Rome - . the roman republic on the eve of the assassination of gaius julius caesar – c. 44 bc. phases of roman

Ancient Rome - . from village to empire. romulus and remus. legend abandoned on the tiber river and raised by a she-wolf,

Ancient Rome - . the roman republic (509-27 b.c.e). rome initially was a republic -people vote for their leaders the

ANCIENT ROME - . 2,000 years ago… rome is the capital of the roman empire and rules the lands around the mediterranean

Ancient Rome - . early beginnings to the republic. virgil’s the aeneid. aeneas – trojan prince who fled troy as it

Welcome to Ancient Rome - . by: abdulla al-badi . roman art. roman art was influenced by many things. they were

ANCIENT ROME - . for over 200 years, rome was kingdom. the etruscans. the early romans (the latins ) learned a great deal

Legacies of Ancient Rome - . we are learning to: explain the legacies of technology, art, architecture, literature, and

Ancient Rome - . aim : who influenced roman society to make it the envy of the ancient world? do now : define the

ancient Rome: From THE roman Republic TO THE ROMAN empire TO THE FALL OF ROME - . aim: how did ancient rome rise and

Rome - . rome. like the persian empire, rome took shape on the margins of the “civilized”