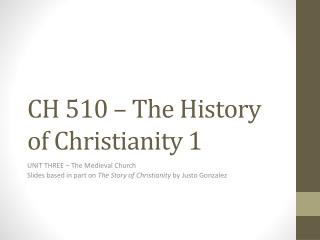 CH 511 – The History of Christianity 2 - . the reformation in germany slides based in part on the story of christianity

Lewis’s Mere Christianity - . hmxp 102 dr. fike. business. who will volunteer a paper for our workshop? if you have a

The History and Physical Exam - . by mindy lacey. the history. welcome the patient - ensure comfort and privacy know and