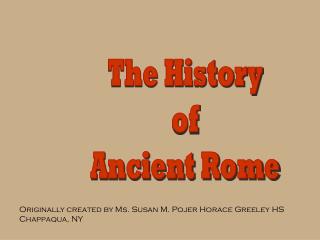 The History of Ancient Rome The History of Ancient Rome. Originally created by Ms. Susan M. Pojer Horace Greeley HS Chappaqua, NY. Geography of the Romans. Rome’s central location contributed to its success in unifying Italy and then all the lands ringing the Mediterranean Sea which it called the “Middle of the Earth.”

The History of Ancient Rome

The Leaders o f an Ancient People - . for teachers. for students. the crowd. 5 th -6 th grade students anyone who wants

World History Ancient Rome - . unit 4. origin of the etruscans. between 900 and 500 bce called themselves the rasenna,

History of Science - . it all starts with the greeks. the ancient greeks are seen, in the west, as our intellectual