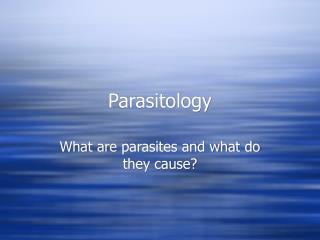 Parasitology. What are parasites and what do they cause?. Parasitology. Protozoans – These are one-celled organisms belonging to the kingdom Protista. Of the 20,000 species, only a few cause disease. They were traditionally classified into phyla based upon their means of motility. Parasitology - . what is a parasite?. definition: an animal which lives in ( endoparasite ) or on ( ectoparasite )

Parasitology - . what is a parasite?. definition: an animal which lives in (endoparasite) or on (ectoparasite) another

Parasitology - . part i protozoans. parisitology. parasitism: two organisms living together one benefits from the

PARASITOLOGY - . prepared by : reem aldossari. general characteristics. the protozoa are the simplest and most primitive

Parasitology - . lab # 1- protozoa. 1. protozoa. classification of pathogenic protozoa according to the site of infection