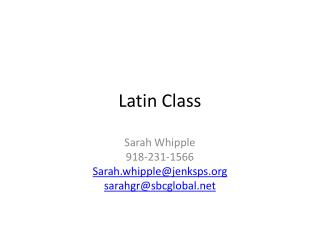 Latin Class. Sarah Whipple 918-231-1566 Sarah.whipple@jenksps.org sarahgr@sbcglobal.net. Grades. Not weighted – a point is a point! Homework – completion grades, collected as a set later (5 assignments due on test days) Tests and Quizzes – about every week Quizzes = 5-45 points Latin and Graeco -Latin Squares - . what we give up to do exploratory designs. hicks tire wear example data. linear

LATIN - . the basics of amelia triplett. table of contents. slide i a brief history of latin - slide ii verbs - slide

Latin America - . latin american revolutions. revolutions in haiti, mexico, and south america were inspired by the

Latin America - . quote ( brookings.edu ). “latin america has been divided almost as much as that which unites them:

LATIN - Am + dg. latin. appreciation workshop. latin through the gospels according to st. mark. session 6. am + dg.

Latin 101: The words of Latin - . parts of speech and grammatical functions how to learn latin vocabulary. 1. parts of

Expectations &amp; Suggestions for Success and Enjoyment in Latin Class

Development and the Working Class in Latin America - . overview. what is development ? bringing the working class (back)