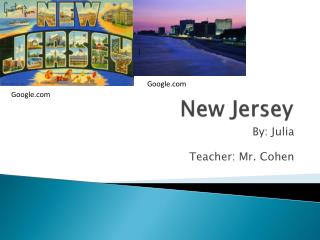 The 13 Colonies: New Jersey - . by iann pavlovic and philip evans. physical map of new jersey. this map shows the

The Jersey Devil: Fact Or Fantasy? - . i will tell you of a creature so fowl that you might just have an accident. by:

Jersey Factors - . we made a project finding all the factors on the jerseys numbers of the new york rangers. first, we