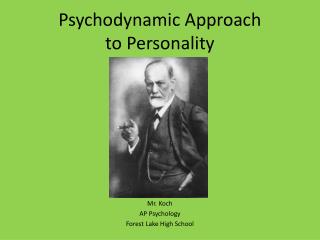 Personality - . how the grinch stole psychology class. but . . . . we’ll first look at the personality theories that we

Psychotherapy - . what is psychotherapy?. interpersonal, relational intervention by trained therapists to aid in life

The Humanistic Approach to Personality - . ap psychology. an optimistic response to the pessimism of psychodynamic

Personality: Characteristics that produce consistency and uniqueness in a person”. - Chapter 2. personality:

Psychodynamic Approach - . “active mind”. “so tell me about your childhood…”. so, a few questions!. from the

Neo-Freudian - . ap ch 10 personality. neo-freudian. people who broke with freud, but whose theories retain a

Psychodynamic Approach to Depression - . freud. freud thought that depression occurs when somebody has suffered a loss

BEHAVIORISM - . theory and therapy. personality—what is, and how is it measured?. personality - an individual’s