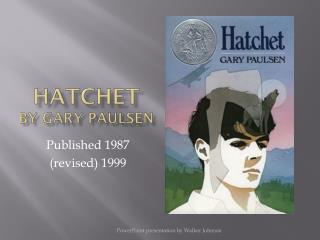 Hatchet by Gary Paulsen. Published 1987 ( revised) 1999. Setting. The setting is the Canadian wilderness during multiple changing conditions, climate, seasons, etc. there is a crashed airplane near an L-shaped lake, which is where it all begins. Plot (conflict).

HATCHET - . by gary paulsen. characters. brian robeson, a 13 year old boy, is on is way to his dad’s oil field in

Guts by Gary Paulsen - . this book is a outdoors book and hunting. gary paulsen wrote this book because the mail he

Hatchet Survival project - . phase 2. using the sky to survive. brian has survived for months in the wilderness all

Hatchet by Gary Paulsen - . questions!. questions for gary paulsen. how did you come up with the idea for hatchet? why

Hatchet by Gary Paulsen - . brian robeson. brian is a thirteen year old kid going to visit his dad in canada. his parents

Gary Paulsen - . by: ryan freeman. born in minneapolis, minnesota in 1939 has written more than 200 books primarily

How To Survive In The Canadian Wilderness - . by kylie griffith. setting. hatchet by gary paulsen time :modern time

Hatchet - . by: gary paulsen. brian. brian is a 13 year old boy,that is very brave,smart, and courageous. he is the only

Hatchet - . book by: gary paulsen report by: celia. plot. this book is about a 13 year old boy named brian robeson. he is

Hatchet - . section 2 vocabulary. a mphibious. able to live both on land and in water. apparent. easily seen; visible.

“Hatchet” - . sequence events visualize story events. sequence. i eat a snack. i do my homework. i talk with friends