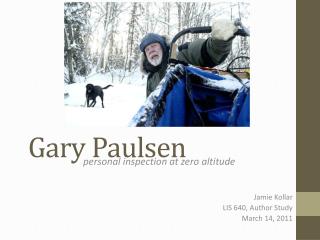 Gary Paulsen. personal inspection at zero altitude Jamie Kollar LIS 640, Author Study March 14, 2011. Life History:. Born May 17, 1939. He struggled with both school and home life, and even ran away from home at one point. Eventually, he dropped out of college to join the Army.

The Challenge by Gary Soto - . are boys better at sports than girls? some people may think so, but think again as you