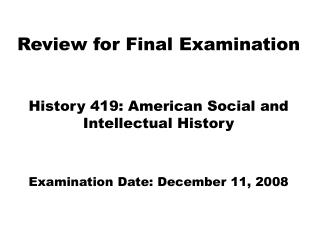 The Cerebellum - . clinical examination. objectives. to be knowledgeable about the aspects of the neurological

Chapter 6 - . examination and assessment of the pediatric patient. introduction. obtaining a complete history on a

Native American History in 4 th and 5 th Grade - Using oral history in the classroom in your table groups, please

STAAR Flashcards 2012-2013 - . everything you need to know about american history, but were afraid to ask……. eras of