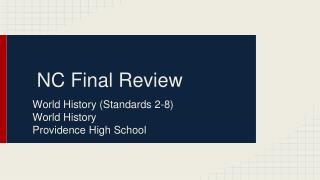 Final Review - . chris and virginia. overview. one big multi-part question. (likely to be on data structures) many small

Final Review - . loan info no localized trendline. suppose your boss gives you a 1% raise while inflation goes up 3%.

Final Review - . what caused the &quot;blacklisting&quot; that cost many film industry workers their jobs in the

Final Review - . economics. when a neutral third party’s recommendation to end a labor dispute is binding: