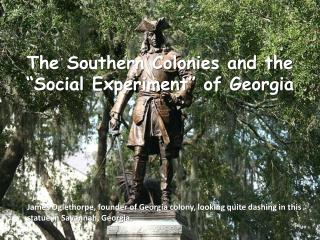 The Southern Colonies and the “Social Experiment” of Georgia The Southern Colonies and the “Social Experiment” of Georgia. James Oglethorpe, founder of Georgia colony, looking quite dashing in this s tatue in Savannah, Georgia. Bell-Ringer.

The Southern Colonies and the “Social Experiment” of Georgia

Georgia Regions and Habitats - . gathered from the internet and adapted for use from another teacher. i apologize for not