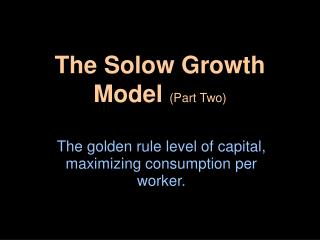 The Solow Growth Model (Part One) - . the steady state level of capital and how savings affects output and economic

Lecture 4: The Solow Model of Growth and Comparing Income across Countries - Announcements. thursday: quiz 2after today,

The Two Stream Model - . two neural pathways involved in human vision dorsal pathway is thought to be involved in motion

Solow Growth Model: The Steady State - . = 0. effect of increasing the investment rate on the steady state. speed of

THE PRACTICE –PART TWO - . sharing and what it means better to receive than give?. review of step one. you have chosen

The Solow Growth Model - 5. the solow growth model. 5.1 introduction. in this chapter, we learn: how capital accumulates

part two - Note : to appreciate this presentation [and ensure that it is not a mess ], you need microsoft fonts: