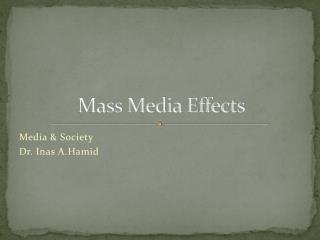 Mass Media Effects. Media & Society Dr. Inas A.Hamid. Bullet Theory. Early mass communication scholars assumed that the mass media were so powerful that ideas could be inserted as if by hypodermic needle into the body. It is called the “Bullet Theory” or “powerful effects theory”.

What is the relationship between media and society? - . kelsey foley. overview. the effect society has on media the

Theories of mass media effects - . what is a theory?. research study. in groups of 4/5, calculate your groups ’ media