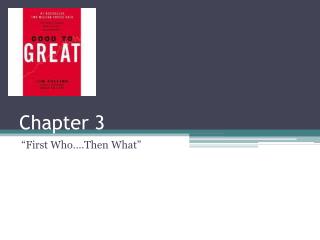 Chapter 3. “First Who….Then What”. Step 1. The executives began the transformation for good to great by getting the right people on the bus and the wrong people off the bus. The 3 Simple Truths. If you begin with “who” rather than “what”, you can more easily adapt to a changing world.