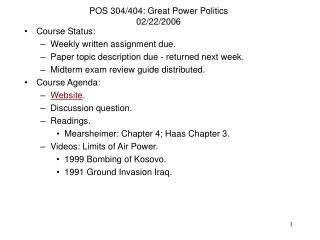 Politics and Power - Opposing views, pair 1 a narrower view: politics as the art and science of government , as affairs

PPT ON PRESENT POLITICS - Check whether the ppt is right or

POWER AND POLITICS - . power. the perceived ability to influence behavior, attitudes, and outcomes. power. resides not in

PowerPoint POWER - . what are academic conferences?. keep your eyes on me. pacing tips. limit yourself to 2 minutes per

PowerPoint POWER - . keep your eyes on me. pacing tips. limit yourself to 2 minutes per slide. large groups: fast-paced

Continuation of the Wind Power PPT presentation - . the picture that emerges from what we saw in the tables and graphs

POWER &amp; POLITICS - . meaning of power. according to kurt lewin “ the possibility of inducing forces of a