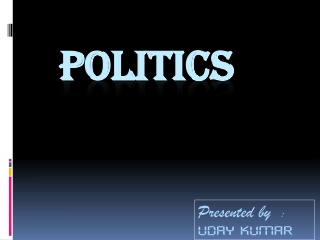 CHECK WHETHER THE PPT IS RIGHT OR NOI

The Politics of Climate Change - . anthony giddens. the book is a prolonged enquiry into a single question: why does

Chapter 9 The Political Process - . big idea ! the work of government is accomplished through the political process.

What do Political Parties Do? - . political party. group of people who seek to control government through winning

Political Culture Daniel J. Elazar - . “the particular pattern of orientation to political action in which each

Politics as a Vocation - . (lecture based on different translation, but page numbers refer to class text) based on

Politics, Immigration, and Urban Life - . chapter 8 (modern) america: pathways to the present. politics in the gilded