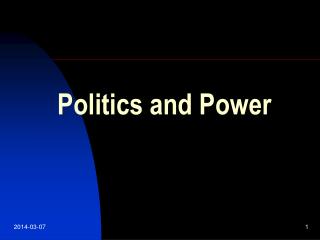 Politics and Power OPPOSING VIEWS, pair 1 A narrower view: politics as the art and science of GOVERNMENT , as affairs of STATE vs. A broader view: politics as part of the entire fabric of SOCIAL RELATIONS – conflicts and cooperation between individuals, groups, classes