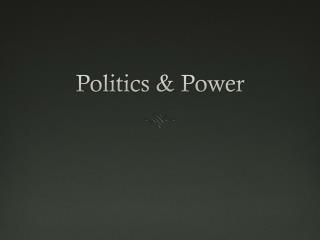 Politics and Power - Opposing views, pair 1 a narrower view: politics as the art and science of government , as affairs

Politics and power in Iraq - . the scene in 2009. posters for the elections are prepared in a printing shop in baghdad.

CONFLICT, POWER AND POLITICS - Some definitions. powerthe ability to influence others to bring about desired

Influence, Power, and Politics - . influence: the ability to use social forces to affect the behavior of others power:

Influence, Power, &amp; Politics - . influence -- this refers to the outcome of an attempt to change someone’s

From power politics to community politics - . concept of european union elaborated by philosophers and theorists. «

POWER AND POLITICS - . power. the perceived ability to influence behavior, attitudes, and outcomes. power. resides not in