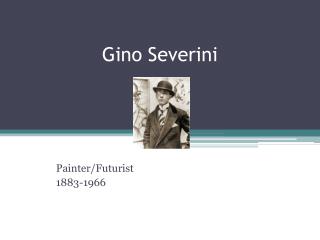 Gino Severini. Painter/Futurist 1883-1966. Who was Gino Severini ?. Gino Severini was an Italian painter who was a part of the futurist art movement. He was born in Cortona , Italy on April 7 1883. FUTURISM - . “our greatest motivation in life comes from not knowing the future .” so we create art of what we think

Futurism - . futurism was founded in italy in 1909. word meaning: the position that the meaning of life should be sought

Futurism - . the dead shall be buried in the earth’s deepest bowels! the threshold of the future will be swept free of