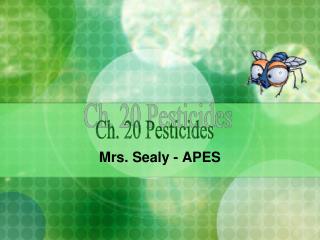 Ch. 20 Pesticides. Mrs. Sealy - APES. Pesticide Types and Uses. A Pest is any species that: Competes with us for food Invades lawns and gardens Destroys wood in houses Spreads disease Is simply a nuisance. Pesticides:. Insecticides Herbicides Fungicides nematocide Rodenticides. APES Mrs. Sealy - . i. past climate change. a. over the past 900,000 years earth’s climate has undergone long periods

APES - . get out ch. 13 notes. meat!. meat production and consumption have grown steadily. animals for meat raised in

APES - . get out air pollution lab get out superfund poster – staple rubric to the bottom (so we see both the poster

APES Math - . you can do math without a calculator!. types of calculation. percent change rate conversions half-life