The Great Migration & the Rebellions of 1837-38 - PowerPoint PPT Presentation 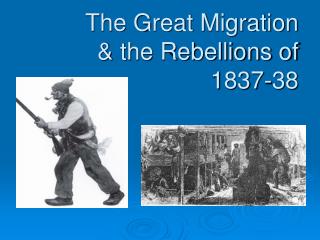 Migration and Disasters From the Great Fire of London to the Fukushima Disaster - . environment and migration. the

The Great Migration and the Harlem Renaissance - . the rebirth of a new image. 1. living in the south. life in the south

L4: The Great Migration Equality and Hierarchy: The African American Experience - . agenda objective : to understand what

THE REBELLIONS OF 1837 - . time for change to a more fair government. the government could not be changed from within the

The Great Migration - . and its consequences. essential question:. what caused the great migration and what were the

A GREAT MIGRATION / A GREAT DEGRADATION - . obj : to determine the role of the u.s. government in western settlement by

The World of Alexander 350-300 BCE - Reign of conquest. after alexander was made king his first year was spent

Migration in the 21st century: a third demographic transition in the making Plenary Address to the British Society for

The Great Migration Series by Jacob Lawrence - . the great migration an american story paintings by jacob lawrence. this