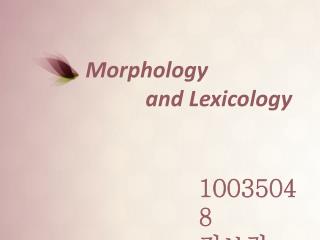 English Morphology and Lexicology - . shao guangqing shaoguangqing@gmail.com www.windofspring.weebly.com. what is

Morphology &amp; Lexicology - . morphology re-cap. a. how many morphemes are in the following words?. builders

English Lexicology Meaning and Context - . week 11 instructor: liu hongyong. warming-up!. what is the meaning of the

English Lexicology (IV) - . contents. 10. changes in meaning 11. american english. to be continued. vocabulary is the