What is ethics? - PowerPoint PPT Presentation 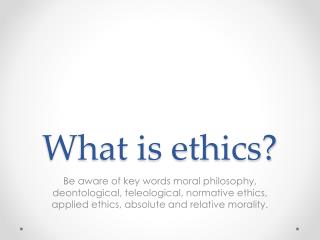 What is ethics?. Be aware of key words moral philosophy, deontological, teleological, normative ethics, applied ethics, absolute and relative morality. How Many Shades of Grey? . Look at the cards you have been given. All of these could be considered to be ‘wrong’ by some people.

What is Ethics? Ethical Behavior? - . view the following! are the behaviors unethical? what makes them unethical? http://

ETHICS - . an overview of the journey. what is ethics? subtopics: words vs. origin ethics vs. morality scope of

Chapter 2 Ethics in Our Law - . lesson 2-1, what is ethics?. survey of ethical theoretic aptitudes. ethics – deciding

INTRODUCTION TO BUSINESS ETHICS - . paul a.b. pajo jr. ii. why be ethical?. what is ethics, and why is it important to

Ethics and informatics What is ethics? • Why are ethical decisions important? - • why are they important in is and

What is Ethics? - . our text: the system of rules that governs the ordering of values. the handout: the rules or

Ethics and Philosophy 2101 - . what is philosophy?. philosophy . the study of knowledge, reality and existence what is

What is Ethics? - “the primary aim of ethics is to determine how one ought to live and what actions one ought to do in

What is Social and Computer Ethics? - . by: muhammad imran saeed assistant professor. department of computer science and

ISSUES ABOUT ETHICS IN RETAILING WHAT IS ETHICS? - . this is a set of rules for human moral behavior. for retailers they

Introduction to Ethics Lecture 4 What is Ethics? - . by david kelsey. ethics. ethics : the systematic investigation into

Chapter 1: Ethics and Ethical Reasoning - . why study ethics? there are differing views of moral rights and wrongs

Ethics - . an overview of the journey. what is ethics? subtopics: word origins ethics vs. morality scope of

Ethics and Morality Theory - . part 1 6 september 2006. administrative. class roll this should be the correct list! short