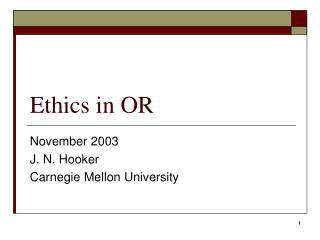 FOOD FIRST ETHICS LATER OR ETHICS FIRST OR FOOD LATER - . ethics first. moral values should be in first in passion’s

Health Care Ethics or Bioethics - . 1. definitions and some basic ideas in health care ethics. ethics is a field of

Creating or Enhancing Ethics Programs Session - . general reactions or questions to the presentation do you have an

WELCOME Ethics in Prevention Corvallis, OR July 14, 2005 - . introductions. expectations?. mindset. why should we learn

Ethics in Engineering - . concepts and cases. introduction. what do we mean by ethics? “a body of moral principles” a

ETHICS IN PRODUCTION - . ethics ???? . moral principles that govern a person`s or group`s behaviour. the moral

Ethics In Education - . justin hill. the back story. beginning 2 nd semester 2012 student/athlete killed in a car