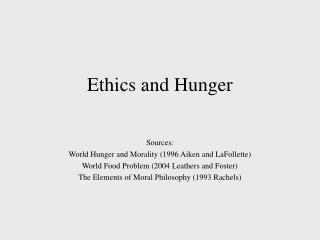 Ethics and Hunger. Sources: World Hunger and Morality (1996 Aiken and LaFollette) World Food Problem (2004 Leathers and Foster) The Elements of Moral Philosophy (1993 Rachels). Ethics. How do we know what is right and wrong? Use ethical theories to develop ethical arguments

Hunger- - . what are some of the variables that influence when we eat?. theories to explain eating (and hunger). role

hunger - . by : hannah mayo. what is hunger ?. today, almost one person in six does not get enough food to be healthy and

Hunger - . examining a world problem. why so much hunger? what can we do about it?. to answer these questions we must

HUNGER - . more than one in seven households struggled to put enough food on the table in 2008 (usda report) 11.1% us

HUNGER - . jt nash. daily undernourishment is a less visible form of hunger -- but it affects many more people. h unger

Hunger - . we define individual hunger as consumption of a diet insufficient to support normal growth, health, and

Hunger - . iic-2.1 describe the interaction of internal cues and learning on basic drives. . warm up: chronicle the

World Hunger and Poverty - . by: kelsey, ryan, and christina. what qualifies as malnutrition or poverty?. malnutrition-