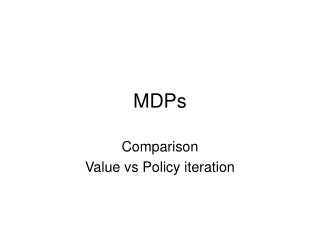 MDPs. Comparison Value vs Policy iteration. Value iteration. two important properties of contractions: (i)A contraction has only one fixed point; if there were two fixed points they would not get closer together when the function was applied, so it would not be a contraction. Factored MDPs - . alan fern *. * based in part on slides by craig boutilier. planning in large state space mdps. you have

Quiz 7: MDPs - . mdps must have terminal states. false every mdp is also a search problem. false “ markov ” means the