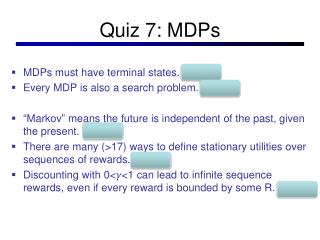 Quiz 7: MDPs. MDPs must have terminal states. False Every MDP is also a search problem. False “ Markov ” means the future is independent of the past, given the present. True There are many (>17) ways to define stationary utilities over sequences of rewards. False Hierarchical Reinforcement Learning - . mausam. [a survey and comparison of hrl techniques]. the outline of the talk.