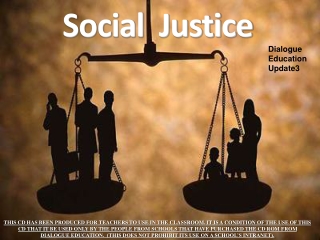 A Social Justice Agenda in Teacher Education: Are We Ready or Not? - . jorge p. osterling center for language and culture

Types of Justice - . retributive justice : punishment/reward given to someone for something he/she has done distributive

SOCIAL JUSTICE - . assignment for class discussion. give three reasons why the bill of rights in your country’s

Law and Justice: An Introduction to Social Theory - . lsj/sis 362 prof. angelina snodgrass godoy autumn 2007. what is

CSI and Social Justice advocacy: What are you afraid of? - . indicators of serious social investment. presentation by

Social Justice - . from egoism to rational cooperation: how to produce a community of cooperators from a collection of

Reflecting on The Call to Justice in Scripture - . sandie cornish www.social-spirituality.net. overview. there are many,

What do we mean by ‘rights’? - . what are rights? what is social justice? should people expect to have social

Social Justice - . “guidelines for success” your key to good grades! introduction to the course. session 1. deacon

Social Justice Committee - What we will cover:. social justice committee. some definitions purpose and functions members:

Social Justice vs. Charity - . learning goal: i will identify the difference between social justice and charity. justice