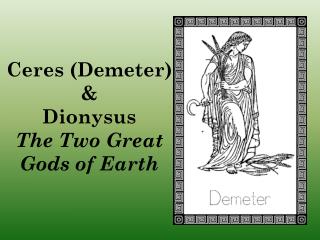 Ceres (Demeter) & Dionysus The Two Great Gods of Earth. Cronus m. Rhea. Hestia. Hades. Poseidon. Demeter. Hera. Zeus. Demeter was the daughter of Cronus and Rhea, and is one of the three goddesses of the first Olympian generation. The History of Earth &amp; Life - . spontaneous generation. the idea that living things could arise from nonliving

Greek Myths and Stories - . chapter one: the gods of greece. this chapter can also be titled as the origin of greek gods