Once Upon A Time... - PowerPoint PPT Presentation 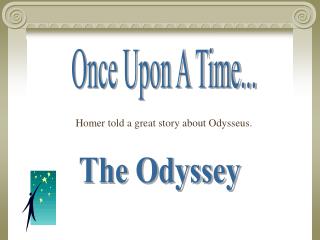 Once Upon A Time. Homer told a great story about Odysseus. The Odyssey. What is an epic?. An epic is a story-poem about a great hero who performs daring deeds that require superhuman courage Told orally; not written. In Greek epics the gods either help or hinder the hero. The Hero’s Journey.

Time Series Analysis and Forecasting - . introduction. a time series is a set of observations generated sequentially in

Chapter 9 The Time Value of Money - . notes:. although it is easiest to use your financial calculator to solve time value

Understanding and Benefiting from the Time Value of Money - . contents. introductory applied questions basic formulas and

Arbonne Opportunity - . triple challenge of time. too many demands on our time too many conflicting priorities not

Once upon a time there was a child ready to be born. One day the child asked - God, “they tell me you are going to