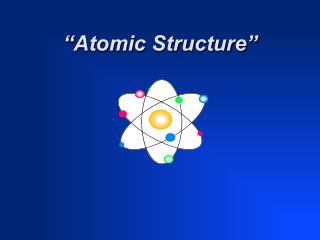 Chapter 7 - . atomic structure. light. made up of electromagnetic radiation. waves of electric and magnetic fields at

ATOMIC STRUCTURE - . james maxwell developed an elegant mathematical theory in 1864 to describe all forms of radiation in

Atomic History and Structure: - 0. atomic history and structure: . what comes to mind when you think of the term

Atomic Structure - . do you know your atomic structure?. basic unit of matter. atom sodium atom animation. what is the